“Run boy run! this world is not made for you, run boy run! They’re trying to catch you…” is a great song by Woodkid and it happens to have this beat that sends chills down the spine making one feel charged up but the lyrics!!! I tend not to wholly agree with. Do not get me wrong I think the song is ok but my article is about College football. Well as rumors would have it there are strong prepositions that this sport should be banned in high school and colleges. 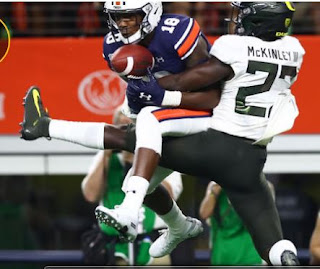 According to an article written by Steven Salzberg a Forbes contributor, there is strong evidence linking college football to brain damage. In his article, Salzberg argues that a growing body of new research has proven that football can severely harm and even kill its players. Not right away, but years later, through a brain disease called CTE, or chronic traumatic encephalopathy. This is a frightening disorder that gradually destroys brain cells, causing memory loss, confusion, impaired judgment, and progressive dementia. Many former players die very younger, in their 40s or 50s, after first suffering for years.

CTE is said to occur because of repeated blows to the head which is common in a football field especially now that the players are bigger and strong. In a study done in Boston University by Jesse Mez and Ann McKee out of 111 former NFL players, 110 were found to have CTE. The validity of this finding is questionable but let me not dwell on that. Nevertheless, is banning the sport the solution, sports are the epitome of hard work and dedication. To get to the pinnacle of their sport, even the most naturally gifted athletes have to give it their all. While there is no single sport that is a 100% safe more research is needed on safety measure for football player rather than pushing for the abolition of the sport.

All men (and by this, I mean both genders) are tossed into the wild towards the tail end of their breastfeeding journey an event marked as an initiation to the world. At this point, they are left to pit their wits and will against natures fury and only the spirited, those willing to endure excel. We call such men heroes and heroine for they are the best of the best. In the ancient times we had Achilles, King Leonidas of Sparta but today we have our sportsmen and women. These are the people that have been constantly tested and conquered all obstacles. Take away college football and you leave sports fans and the sportspeople with nothing.