The period of short rains was just starting in a semi-arid part of the south Sudan. The early morning mist had cleared and faint blue smoke rose from the ground as the hot sun touched the surface of the wet earth.

‘People in the underworld are cooking.

people in the underworld are cooking!’ the children shouted, as they pelted one another with wet sand.

‘Come on, Opija,Tekayo shouted to his son. Give me a hand, I must get the cows to the river before it is too hot.’ 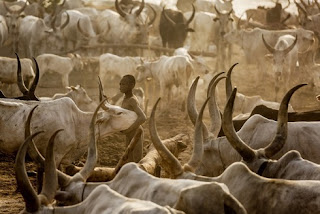 Opija hit his younger brother with last handful of sand, and then ran to help his father. The cows were soon out of the village and Tekayo picked up the leather pouch containing his lunch and followed them. They had not gone far from home when Tekayo saw an Eagle flying low searching for a suitable spot to have its meal. Tekayo promptly threw his stick at the bird. He hit the meat and it dropped to the ground. It was a large piece of liver, and fresh blood was oozing from it. Tekayo nearly threw the meat away , but he changed his mind what was the use of robbing the eagle of its food only to throw it awa? the meat looked good: It would supplement his vegetables lunch wonderfully. he wrapped the meat in a leaf and pushed it into his pouch.

They reached a place where there was plenty of graa. Tekayo allowed the cows to graze while he sat under an ober tree watching the sky. It was not yet lunch time but Tekayo could not wait. the desire to taste that meat was burning within him. He took the meat and roasted it on a log fire under the ober tree. When the meat was cooked he ate it greedily with millet bread which his wife had made the previous night.

‘My! what delicious meat,’ Tekayo exclaimed. He licked the fat juice that stained his fingers and longed for a little more. he threw away the bitter herbs that were the rest of his lunch. The meat was so good,and the herbs would merely spoil its taste.

The sun was getting very hot but the cows showed no desire to go to the river to drink. One by one they lay down in the shade, chewing the cud. Tekayo also become overpowered by the afternoon heat. He rested against the trunk and slept.

While asleep, Tekayo had a dream. He was sitting before a log fire roasting a large piece of liver like the one he had eaten earlier. His mouth watered as he watched rich fat from the roasting meat dropping into the fire. He could not wait, and although the meat was not completely done, he removed it from the fire and cut it up with his hunting knife. But just as he was about to take the first bite, he woke up.

Tekayo looked around him, wondering what happened to the meat! could it be that he was dreaming? ‘No, no, no,’ he cried. ‘It was too vivid to be a dream!’ He sat upright and had another look around, as if by some miracle he might see a piece of liver roasting on the log fire besides him. But there was nothing. All he saw were large roots of the old tree protruding above the earth surface like sweet potatoes in the sandy soil.

The cattle had wandered a long way off. Tekayo got up and followed them. They reached the river bank and the thirst cows ran to the river. While the cows drank , Tekayo sat on a white stone cooling his feet and gazing lazily at the swollen river as it flowed mightily towards the plain.

Beyond the river stood the great ;Ghost Jungle”. A strong desire for the rich meat came back to Tekayo and he whispered, ‘The animal with that delicious liver must surely be in that jungle.’ He sat there for a while thinking. The temptation to start hunting for the animal nagged him. But he managed to surppress it. The afternoon was far spent and there were a long way from home. The next Morning Tekayo left home earlier than usual. When his wife begged him to wait for his lunch, he refused. He hurried from home, taking his hunting spears with him.

Tekayo made it impossible for the cows to graze. He rushed them along, lashing at any cow that lingered in one spot for long. They reached the edge of the Ghost jungle and there he left the cows grazing unattended.

Tekayo could not see any path or track leading into the ‘Ghost Jungle’. The whole place was a mass of thick bush and long grass covered with the weird silence in the jungles that frightened him. But the vehement desire within him blindly drove him on through the thick wet grass.

After walking for some time he stood and listened. Something was racing towards him. He turned round to look, and sure enough a big impala was running towards him. Warm blood rushed through Tekayo body, and he raised his spear to kill the animal. But the spear never landed. He came face to face with a bid leopardess that was chasing the impala. The leopardess roared at Tekayo several times challenging him as it were to a duel. But Tekayo looked away, clutching the spear in his trembling hand. There was no-one to fight and the beast went away after her prey.

‘What a bad start,’ Tekayo said slowly and quietly when his heart beat normally again. ‘ That wild cat will not leave me alone now.’

He started to walk back towards the plain, following the track he had made. The roaring leopardess had taken the life out of him.

He saw another track that cut across the forest. He hesitated a little and then decided to follow it leaving his own. The track got bigger and bigger and without any warning Tekayo suddenly came upon a baby wildebeest which was following a large flock grazing at the foot of a hill. He killed it without any difficulty. he skinned the animal and extracted its liver, leaving the rest of the carcass there.

Tekayo returned to the herd, and he sat down to roast the meat on a log fire. When the meat was cooked he took a bite and chewed it hurriedly. But he did not swallow it: he spat it all out! The liver was as bitter as the strong herbs given to constipated children. The back of his tongue was stinging as if it had burned. Tekayo threw the rest of the meat away and took his cows home.

He arrived home tired and disappointed; and when his young wife set food before him, he refused to eat. He pretended that he had stomach ache and did not feel like eating. That night Tekayo was depressed and in low spirits. He did not even desire his young wife who slept by his side. At down the young wife returned to her hut disappointed, wondering why the old man had not desired her.

For the rest of this story Kindly purchase it at: https://bit.ly/36a9hwN